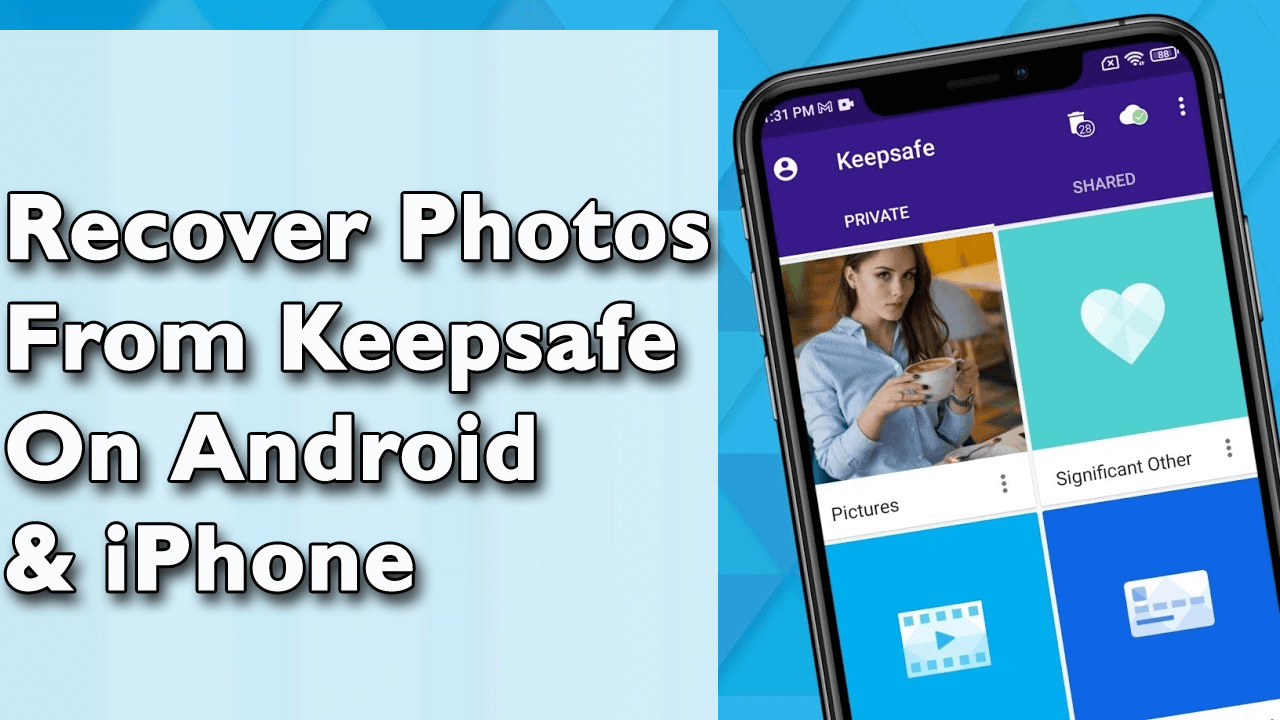 Are your PRECIOUS photos deleted from the Keepsafe photo vault on Android or iPhone? Wondering why the pictures are lost and how to restore photos from Keepsafe?

Well, everyone wants their photos to keep safe and secure from others as they are sensitive. In this situation, the Keepsafe photo vault is one of the best options. It allows users to have complete control over their data like which one to show and which to share.

However, the app sometimes experiences some problems, and the pictures stored on it get deleted due to various reasons. So, if your photos are also lost from the Keepsafe album then this blog is for you. Here, you will know the best ways to recover photos from Keepsafe on Android & iPhone.

How To Recover Photos From Keepsafe On Android/iPhone

Without wasting much time, let us go through the recovery methods and do Keepsafe deleted photos recovery with ease.

However, a free user can upgrade to a premium user to recover deleted pictures.

On the other hand, if you don’t have files in the Trash bin, you won’t be able to recover them. Because when you delete your photos from the Trash bin, that time those photos also get deleted from Keepsafe’s servers also.

Steps to restore your lost photos from the Keepsafe trash folder:

As Keepsafe offers its premium user to keep trash in the Trash folder and also users can restore them until pictures get deleted from the trash folder in the Private Cloud feature.

You just need to follow the steps to know how you can restore those lost photos from Keepsafe Private Cloud. Remember, the steps are similar for Android as well as iOS users. Now, shut down Keepsafe and open it again on your device. All your deleted Keepsafe pictures will be restored. If there is any issue while restoring pictures after installing the app again, please contact the Keepsafe support team at support@getKeepsafe.com.

Many users are not premium members. In such a situation, it’s obvious to think of how to recover deleted photos from Keepsafe without premium. No need to worry as you can take the help of professional software like Android Data Recovery. This is the best Keepsafe deleted photos recovery program that easily retrieves every lost photo without backup.

It has a powerful scanning algorithm that scans your device for the disappeared files. It allows a preview of the data before recovery. Not only photos but this powerful software restores other data also like contacts, videos, documents, music files, WhatsApp chats, text messages, call logs, etc.

Therefore, there is nothing to wait for as you only need to download and install this amazing software to recover photos from Keepsafe after factory reset. Check out its complete user guide to know how to use the software.

Method 4: How To Rescue Disappeared Keepsafe Pictures On iPhone/iPad

If you are an iPhone/iPad user and also pictures from Keepsafe then you also think of why Keepsafe pictures not showing iPhone and how to retrieve them. If this is the case, it’s suggested to use iPhone Data Recovery software. This is a highly recommended program by professionals to restore deleted photos from Keepsafe on iPhone.

It is easy to use and allows users to rescue lost pictures with one click without backup. The iOS Keepsafe photo recovery software works in 3 simple steps. In addition to photos, other data are also restored such as contacts, call logs, iMessages, music, WhatsApp, Kik, Viber, videos, text messages, and others.

It does not matter what reasons have led to such incidents, using this amazing program easily restores every data from iPhone/iPad/iPod Touch. The program supports all iPhone models like iPhone 14/14 Pro/13/12/11/X/8/7 etc.

So simply download and use this recovery tool and get back your pictures to access them again. To use the software hassle-free, check out its complete user guide.

Get back lost or deleted iPhone/iPod/iPod Touch data without any backup and in a quick time.

Can I recover permanently deleted photos from Keepsafe app?

Yes, users can easily recover deleted photos from Keepsafe on Android and iPhone. If the user is using the premium version or if it is in trial then the missing pictures can be restored from the Trash folder. In addition, if the private cloud option is enabled then also your disappeared photos can be retrieved.

Where are Keepsafe photos stored on iPhone/Android?

Generally, the photos on Keepsafe are stored on storage/sdcard0, mnt/flash, storage/emulate/0, mnt/sdcard etc. However, the location can vary from device to device. You can find the folder in your phone’s root folder.

How do I get my pictures back from Keepsafe app?

When you fail to retrieve pictures from the app, then it's suggested checking its Trash folder. If not then uninstall the app and again reinstall it. Now, again open the Trash folder to get back your photos from the Keepsafe folder. Remember, this process will only work when the Private Cloud option is activated.

Is it possible to transfer Keepsafe photos to a new phone?

Yes, you can easily transfer your Keepsafe photos from one device to another. For that, you must have a backup of pictures in the Private Cloud. Simply install Keepsafe on your phone and log in with your email and password. Also remember to enable private Cloud option on both devices and also check that your data is synced 100%.

So this blog has come to an end where I have discussed the best ways to recover deleted photos from Keepsafe on Android & iPhone. Though it’s true that the pictures can get deleted accidentally, formatting, or some kind of technical fault. Fortunately, there are ways to overcome the data loss situation.