The smartphone allows us to capture beautiful moments of our lives and we enjoy them later on when we see them. We all love to see our memories captured at that moment. But at the same time, some consequence occurs in our phone where all the captured photos get deleted. What to do and how to recover deleted photos from Android is probably the topmost question in your mind. Simply use Android Data Recovery and get back permanently deleted pictures from Android.

Don’t worry, it’s not too late to retrieve deleted photos from Android. You still have a chance to restore those disappeared photos on Android.

Don’t waste any time, just read this blog carefully. Here you will know how do I recover permanently deleted photos from Android.

Can I Get Permanently Deleted Photos Back?

Yes, you can recover deleted photos on Android because actually the pictures are not permanently deleted. Though it’s true that the photos disappear from Android internal memory but they still reside inside.

The space that the photo was previously stored, now it’s marked as “unused” and any new data can get stored in its place. If you save any new data, then it will overwrite the previous data and you will end up losing the pictures forever.

So here it is advised to remember a few things:

How To Recover Deleted Photos On Android With/Without Backup?

Now it’s time to walk through the methods that will answer all your questions on how to recover permanently deleted photos on Android.

So let’s check them one by one:

One of the best ways to recover deleted photos from Android is by using Android Data Recovery software. I recommend this because it’s a professional tool that helps you to retrieve deleted photos on Android without backup.

No matter in which conditions your pictures are lost or deleted, this amazing tool just works efficiently. Not only photos but effectively works to recover other useful data as well such as contacts, videos, documents, notes, WhatsApp, call logs, text messages, and others. It scans the internal as well as external storage to find out lost pictures from the phone.

Therefore, you don’t have to worry when your photos disappeared accidentally from the phone. Simply Download Android Data Recovery and recover deleted photos on Android without any worry.

Check Out The Steps To Recover Lost Photos On Android

Method 2: How To Recover Permanently Deleted Photos From Google Photos

Google Photos is very much popular among users that are developed by Google. It stores all your photos safely as it acts like cloud storage from where you can restore the items anytime. This is the best way to recover permanently deleted photos from Android without a computer.

Note– The photos remain in the Google Photos app for 60 days in its Trash folder. After that, the stuff is automatically deleted forever.

Here are the steps to follow to recover deleted photos from Google Photos: 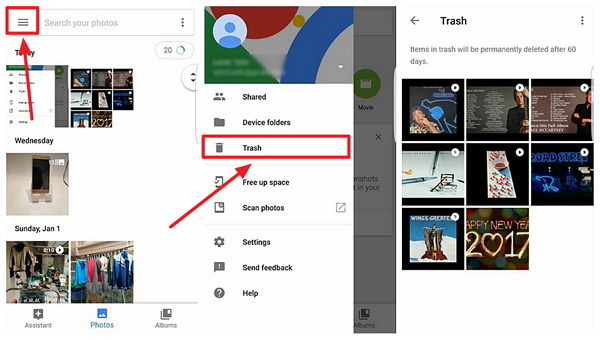 Method 3: How To Recover Deleted Photos From Google Drive

If you have a backup habit then you also have used Google Drive to store your important photos. Most users use this cloud feature because users get 15GB of storage space to keep their data safe and secure.

Here is how to restore deleted photos from Google Drive: 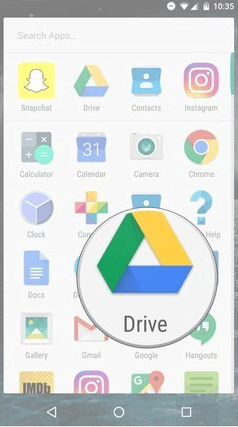 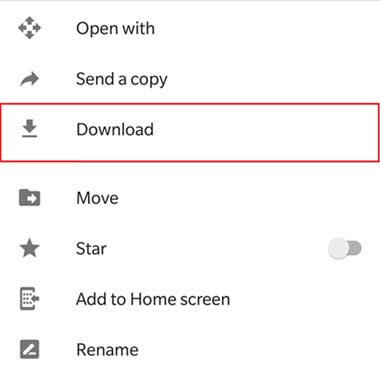 Method 4: Use Dropbox To Recover Lost Pictures From Android

Many users use Dropbox to back up their user data and pictures so that they don’t have to deal with data loss situations in the future. If this is so then you can easily recover deleted photos from Android for free.

Just check out the below steps: 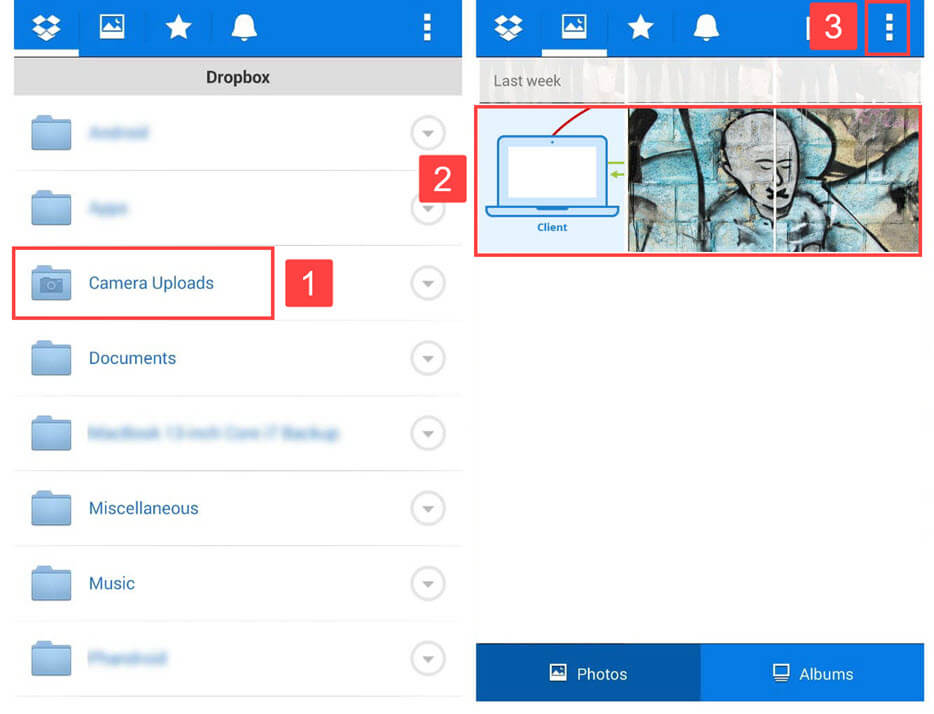 Method 5: Use Microsoft OneDrive For Disappeared Pictures On Android

Microsoft’s OneDrive cloud feature allows users to backup and delete photos automatically. It backup the picture from the phone and save it on the cloud and then deletes the photo from the device. All these pictures that are saved can be restored when they are lost from any device. 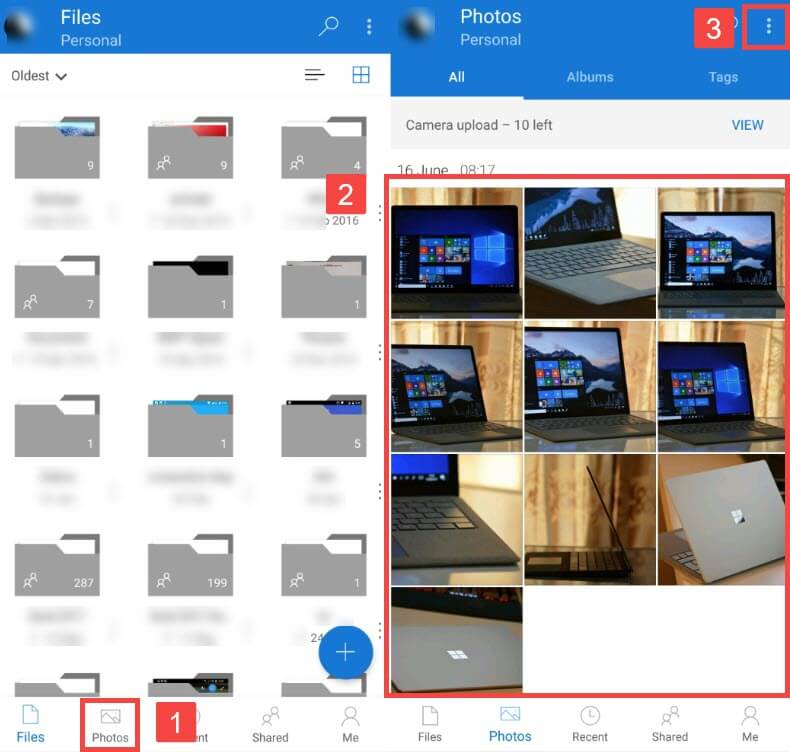 There are several apps available on Google Play Store that can help to retrieve deleted photos from Android. One such app is DiskDigger that allows you to restore photos from Android phones. You can easily get it on the Google play store. 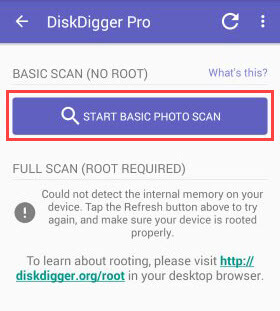 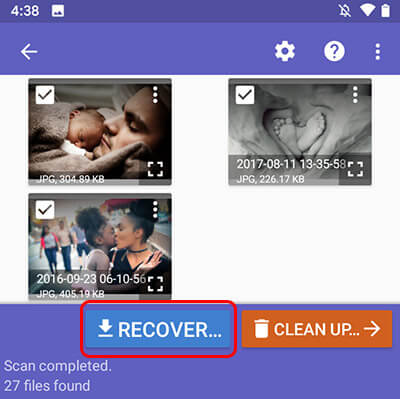 Method 7: Use Local Backup To Retrieve Photos On Android

If you have enabled the “sync” option on your phone then you have an option to recover deleted photos via the built-in backup feature.

In fact, for those users who are looking for how to recover deleted photos from Android without root, this method is for them. But remember that this option is not for all as many users have reported not getting the backup and restore feature.

However, if you have this option on your phone then you should check once for the deleted photos.

Most Android phone comes with an SD card slot where users can increase the space and save their data. If your phone supports the SD card and your store your data on it then you can get back lost pictures from the SD card as well.

Many times, you save your photos to the SD card without knowing but this can be helpful for you. Because you can use the SD card on the phone and check if those photos are available. Even you can use any software to recover lost photos from SD card on Android.

If you regularly back up your content to keep them safe then I think the computer is the best. And most users back up their valuable data on the computer. This is easy to access and you can store a large amount of data including photos to computers.

If you have created a backup of photos on the computer then you can easily restore them from the PC. It’s simple, connect your phone to your PC via USB cable and access the folder on the computer where you have saved the pictures.

Method 10: Other Alternatives To Recover Photos From Android

There are still some practical ways that can help you to bring back lost photos on Android. It’s not necessary that you will get the photos back but once you should try it.

Generally, we don’t share photos with the public via social media platforms because of privacy. But many of them upload photos to share with others. In fact, most relatives or friends also share photos of you on social platforms that you were looking for. Therefore, you should once check them and if you are lucky, you can get back the disappeared pictures on Android.

There are several mail services that allow you to attach files and mail them to anyone you wish. So you should also check if the pictures you are looking for are available on attachments that you have sent to anyone. They can be in your inbox from where you can easily download them.

Bonus Tip- How To Prevent Photo Loss In Future On Android?

You never know when your precious moments will disappear from the phone. And you also cannot believe every recovery method gives you a 100% guarantee to recover the files. In such a situation, it’s better to do something rather than take risks.

So you should backup all your important photos to a safe place that can keep your data secure for a longer time. Such backup ways include Google Drive, computer, OneDrive, SD card or even you can use a professional tool like Android Backup & Restore.

Such a tool allows you to backup all essential data including photos and you can restore them whenever you want. It’s an easy process and at the same time, your data is also safe.

Is there a Recycle Bin on Android?

Most of the users have this question in their mind. But sorry to say, guys, there is no recycle bin on Android. Well, many third-party browsers or apps provide this option to users and act as a recycle bin. Therefore, users should regularly back up their user data as Android phones do not have an option of recycle bin.

Where are deleted photos stored on Android?

Generally, after the photos are lost from the phone, they are still available on the device's internal memory but invisible to the user. Only with the help of a recovery tool like Android Data Recovery, it possible to find those pictures on Android.

Does Android have a recently deleted folder?

No, till now Android does not have come up with this feature like iOS of the recently deleted folder. After losing pictures from Android, the possible ways to get back is by using a backup or a recovery tool like Android Data Recovery. With simple clicks, all your photos will be recovered without backup.

Everyone loves to capture their beautiful moments but never wants to lose them at any cost. However, some situation leaves us shocked like losing photos from an Android phone. So, I have explained every possible way to recover permanently deleted photos on Android in this article.

Just walk through them and try every method that will help you to retrieve those missing pictures. also recommended using Android Data Recovery as it helps to restore all deleted photos without backup.